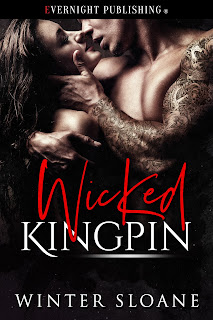 When her traitorous brother loses Leah Taylor in a game of cards, Leah tastes despair for the first time in her life. She’s spared from a fate worse than death when Knox Carter takes an interest in her. Knox rules the city with an iron fist and he doesn’t take no for an answer. Knox is a monster. He claims Leah is now his property but he treats her like a queen. Leah can’t fall in love with a mobster, but once he conquers her body, she knows her heart won’t be far behind.

One look and Knox’s become obsessed with the curvy waitress with the fire in her eyes. Knox’s not a good man. He’s mauled down numerous corpses to create his empire. He’s not afraid of bloodshed. Taking a woman was never part of his plans but Knox is beginning to change his mind. Every king needs a queen and he knows Leah’s the goddess he’s been waiting for his entire life.